Best Vein Clinic Near Me in Rockville Center, Long Island

Are you looking for the “best vein clinic near me in Rockville Center?” If so, you’ve come to the right place — Vein Treatment Clinic is widely recognized as the best state-of-the-art vein treatment center in Long Island, highly accessible to patients from Rockville Center, Lindenhurst, Babylon, Islip, etc. You don’t have to take our word for it — have a look at our 5-star ratings and reviews from patients!

The following are just some of the many reasons VTC Long Island is reputed as the best vein treatment center near Rockville Center:

Vein Treatment Clinic is located in Lindenhurst, a short 5-minute drive from the southern state parkway, making it highly accessible to patients from neighboring towns, including Rockville Center, Babylon, Amityville, Merrick, Plainview, Islip, etc. We provide plenty of parking spaces, so you can drive over to our vein clinic anytime!

Venous insufficiency is the root cause of spider veins and varicose veins. Chronic venous insufficiency is a circulatory disorder in which your vein valves collapse, causing blood to flow backward, leading to blood accumulation in your leg veins. The accumulated blood applies pressure on the vein walls, leading to vascular dilation, which, in turn, leads to spider veins and varicose veins.

As explained in the previous section, spider veins and varicose veins are often caused by underlying venous insufficiency. As such, it’s not enough to simply treat the superficial varicose veins and spider veins, because that increases the risk of recurrence. The vein doctor must address the underlying venous insufficiency, and that’s where minimally invasive vein treatment options come in.

In the past, vein doctors could only treat vein disease by surgically removing the diseased vein, which had a high risk of side effects and complications. Modern minimally invasive treatment options aren’t as extreme — the vein doctor can seal the diseased saphenous vein using nonsurgical and safe methods that conclude within an hour with no downtime. 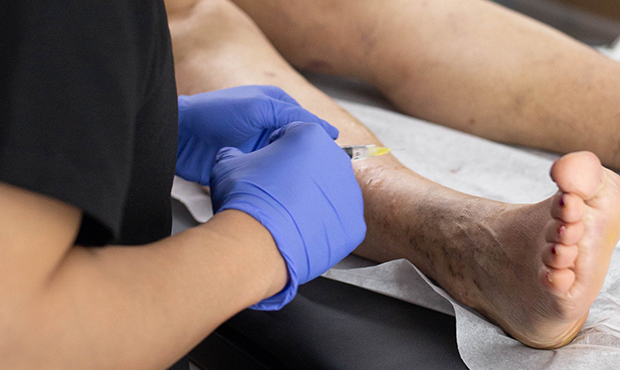 The vein physician administers local anesthesia and creates an incision on the skin’s surface. The vein specialist inserts an endovenous laser into the problematic saphenous vein under ultrasound guidance. Once the laser fiber is inside, the vein doctor activates it to generate laser energy, collapsing the problematic vein.

The vein doctor injects VenaSeal (a medical-grade adhesive) into the affected saphenous vein under ultrasound guidance. The medical adhesive interacts with the vein walls to seal them closed, turning the diseased vein into scar tissue. The accumulated blood flows into healthier veins, restoring smooth blood circulation.

The vein doctor injects a chemical solution called sclerosant into the spider veins. Sclerosant acts like a vein glue, fusing the spider veins’ walls, turning them into scar tissues. Over time, the scar tissues get absorbed by the body, fading away from the skin’s surface.

Vein Treatment Clinic is the best and most accessible state-of-the-art vein clinic near Rockville Center, Long Island. Our vein center is on the Montauk Highway bordering Suffolk County and Nassau County, less than 30 minutes from Rockville Center via southern state parkway or NY-27 W. For more information, please schedule an appointment with our vein doctor today.